‘How SARS detained me 22 days, tortured me until I lost my pregnancy’ 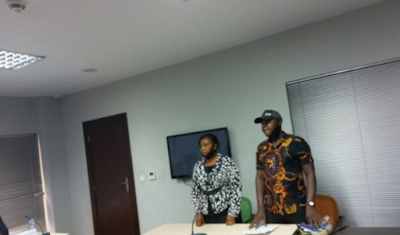 Ndubuisi Obiechina, a teacher, has narrated how she lost her two-month pregnancy in custody of the disbanded special anti-robbery squad (SARS).

Speaking when she appeared before the Lagos state government set up to probe police brutality, Obiechina said she was arrested in 2017 after being accused of being a thief and a kidnapper.

Identifying some of the SARS operatives who tortured her as Phillip Rilwan, and Haruna Idowu, the teacher said she was detained for 22 days.

“On June 1, 2017, I received a text message from an unknown number that I had a parcel from DHL. A caller using different numbers asked for my home or office address and I gave him my school address upon my husband’s advice,” she said.

“The following day, I saw a black jeep with huge men inside it. One of them was in a DHL uniform. Immediately, they approached me, they started beating me. They said I should enter inside. They said I was a thief, an armed robber. The one in the DHL uniform removed it. My HM (headmistress) was peeping at us. I said let me go and tell her. They said no.

“I said my kid is there, they said no, that I should follow them, that my kid would die there. My HM came to the gate; they pointed a gun at me. She asked what was going on. They said, ‘This woman is a thief, a kidnapper. She must follow us and go. They said they were Police, SARS’.

“They pushed me inside the car and moved. The men were slapping, beating me. I was two months pregnant. I started vomiting. That’s when they found out I was pregnant. But they kept torturing me. I told them I did not know the suspect.

The victim said the operatives had no mercy on her, narrating how she was subjected to hardship despite her condition.

“For one week, as a pregnant woman, I did not eat, I did not drink. I told them I wanted to go and register for antenatal. They said I should give birth to the child there,” she said.

“I told them the doctors said I don’t need any stress that my kind of body is the body that needs to stay one place. They said, no. Let the baby die. In the process, I lost the baby.

“It was later after the detention, I went to the hospital. They then found out that the baby was gone. We had to wash it off.”

She said SARS operatives also arrested her husband who came to check up on her, adding that they were put in different cells.

She also revealed how SARS operatives unlawfully took N50,000 in their possession and alleged that they both paid N150,000 and N250,000 cash for their bail.

The victim explained that although the court awarded her N2 million as damages against the police authorities, she is yet to receive the money.