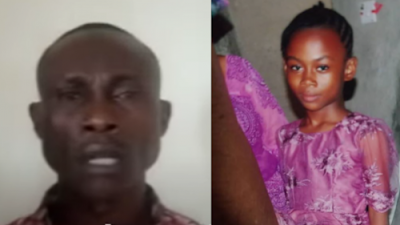 Dickson Okechukwu, father of an 11-year-old girl, Favour, who was recently gang-raped in Lagos, has narrated how he found her corpse in a building on Olarewaju Street, Ejigbo, after a frantic search for her.

Favour, a Junior Secondary School student, was sent on an errand to buy a carton of gala for her mother around 3:00pm on Wednesday.

The deceased was said to have been lured into a building on Olarewaju Street where four men took turns to rape her.

She was suspected to have been gaged in the process, apparently to avoid raising the alarm.

Her devastated father described her as a brilliant girl.

He said, “She’s my daughter, she’s very brilliant. She’s a girl that has future but unfortunately some hoodlums cut her life short. The incident happened on Wednesday 30th of September.

"She prepared for school in the morning, promising to meet me later in the day. I also went out for my business.

“But when I came back around 9:00pm, I was shocked when my wife said Favour hadn’t returned from where she was to collect a carton of the gala because it was unusual of her to stay long outside. I immediately went to some of her classmates houses to look for her but they all said they didn’t see her. Her classmates parents too joined us and we started searching for her. I started walking like a mad man, asking everyone I saw about her whereabout and it was getting dark.

“So when I got to the compound, I met three people and told them what I heard. They were speaking Yoruba, so I didn’t really understand them, they pointed the room where the incident happened to me and behold, when I got there, it was my daughter, Favour! She was naked with blood all over her body. I shouted, shook her vigorously as I called out her name, begging her to wake up.”

Though the suspects are still at large, Brimcewil Tabi, owner of the room in which Favour was gang-raped, has been arrested and claimed he knew those who perpetrated the act.