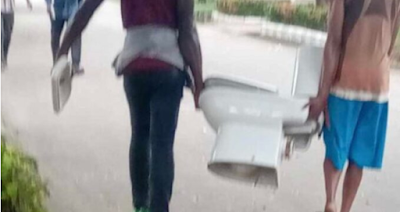 There has been looting of private and public property across the country in the aftermath of protests against police brutality.

Warehouses where COVID-19 relief materials such as bags of rice, cooking oil, noodles and spaghetti were kept have been looted across the country.

The mobs accused state governments of hoarding these relief materials — an allegation governors have denied.

Before the looting began, some citizens had taken to the streets to protest against police brutality.

These demonstrations lasted for about a week, but some hoodlums hijacked the protests to loot and attack citizens.

The looting continued even after the demonstrations ceased.

In response to the mayhem, state governments began imposing curfews but that did not deter the hoodlums from breaking into warehouses and carting away food items.

Homes of public figures and shopping malls were also affected.

But some of the items carted away by these hoodlums appeared odd.

Here are some of the odd items looted in different parts of the country.

BED FROM A PSYCHIATRIC HOSPITAL

They released some of the patients and carted away a number of items, including a bed.

The Psychiatric Hospital, located along Calabar Road, Calabar, was vandalised today and every single item looted. All patients in the hospital, including those with severe psychiatric disorder or mental illness were set free by the hoodlums. One looters with his loot, a bed. pic.twitter.com/nAAAymYjT1

A photo that has since gone viral showed two men carting away a toilet seat from a house that had been ravaged by a mob in Calabar, Cross River capital.

Speaking with journalists on Sunday, Donald Duke, former governor of the state, expressed worry over the looting that occurred in Calabar.

“When you see someone carting away a used toilet base, you should know there is a big problem. We need to help our young people to succeed. We need to educate, equip and sustain them,” Duke said.

They looted everything including 'toilet seat' #looting pic.twitter.com/d1KOWrmpjR

In Kaduna, an office of the National Agency for Food and Drug Administration and Control (NAFDAC) was looted.

Apart from doors and office equipment carted away, some people stole “expired and dangerous drugs”, according to the Kaduna state government.

Acting Governor @DrHadiza Balarabe is inspecting the places that were looted yesterday by criminal elements. First port of call is NAFDAC where expired and dangerous drugs, office equipment and doors were stolen pic.twitter.com/h9nmYhfmo5

In Jalingo, Taraba, a signage of the state’s capital city was stolen.

This is totally insane. #Jalingo 🤣 pic.twitter.com/wWAPXjLW9T

In Ekiti, some residents looted agricultural produce the state government said is “poisonous”.

“Information at our disposal revealed that the Federal Government’s silos, the ADP warehouse and the State Emergency Management Agency (SEMA) stores, all in Ado- Ekiti, were attacked by hoodlums under the guise of seeking Covid-19 palliatives,” Akin Omole, Ekiti commissioner of information said.

“We insist that Ekiti state currently has no Covid-19 palliative warehouse as all the palliatives had been distributed. Unfortunately, the items carted away were Single Super Phosphate and NPK fertilisers, which they erroneously thought was “Gaari’’, cassava grains.

“The SEMA store too has only emergency supplies for disaster response. Some people even made away with pre-fermented corns preserved for planting. All these items are poisonous and not fit for consumption.

“We, therefore, appeal to our people not to consume these items because they can kill.”