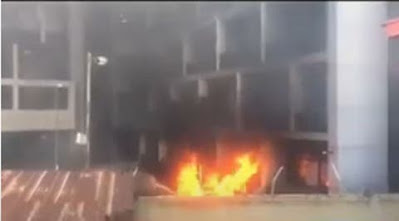 Suspected hoodlums have entered the Lagos headquarters of the Nigerian Ports Authority, Marina.

A member of the Lagos State Fire Service, who confirmed the incident, said they set fire to the building.

He noted that efforts were on to salvage the situation.

The firefighter explained that a statement would soon be released on the level of destruction done to the federal facility.

The arson was said to be a fallout of the attack on protesters at the Lekki tollgate.

While witnesses claimed that seven people were killed and many injured, the state Governor, Babajide Sanwo-Olu, said nobody died.

Although the governor said the military was responsible for the attack, the Nigerian Army denied complicity in the shootings and tagged reports on the incident as fake news.