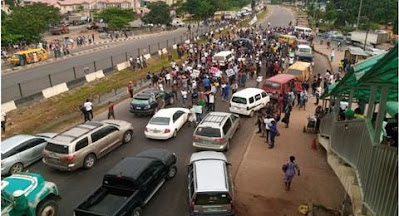 Many commuters were stranded around the Alausa and Berger areas in Lagos State as protesters blocked the Alausa section of the Lagos-Ibadan Expressway.

It was gathered that the protesters moved from the entrance of the Lagos House of Assembly to block the highway on Friday.

The placards-carrying protesters barricaded the highway from the Secretariat bus-stop, opposite Magodo Phase II.

The effect of the gridlock had begun to extend to the Otedola Bridge along the Lagos-Ibadan Expressway.

The newsmen had reported that thousands of Nigerians are protesting against police brutality in the country.

Apart from Lagos, protests are taking place across the country, including in the capital Abuja and Osun State.

The movement initially targeted the federal Special Anti-Robbery Squad, widely accused of unlawful arrests, torture, and murder, but has since broadened to include all police forces.

While the SARS unit was suspended on Sunday, groups such as Amnesty International said the government had not gone far enough, pointing to previous unsuccessful attempts to ban the force.