Gov. Ugwuanyi can never be a murderer – Fani-Kayode 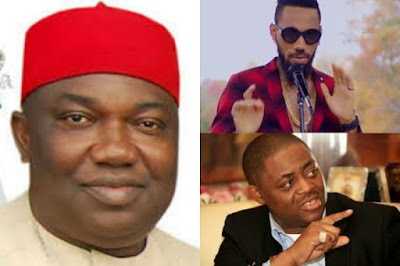 Former Aviation Minister, Femi Fani-Kayode has come to the defence of Governor Ifeanyi Ugwuanyi of Enugu State, saying he can never be a murderer as being painted by some people.

Indigenous rapper, Phyno had accused the Enugu State Government of threatening his life and that of other #EndSARS protesters.

In a tweet he shared, he stated that the Enugu State Government should be held responsible should anything happen to them. Phyno accused Governor Ifeanyi Ugwuanyi of storming the protest with thugs who tried to fight them.

Reacting to the allegations, Fani-Kayode said he had  been at the forefront of those fighting against injustice and oppressions in the last five to six years and that Ugwuanyi could not be a heartless murderer.

He said such insinuations were false, stressing that if the Governor was to be a killer, he would be the first to say so.

”I have been in the forefront of those fighting against injustice and oppression for the last 5 years & I have spoken out more than most.

”I wish to state loudly & clearly that the suggestion that Gov. Ifeanyi Ugwuanyi of Enugu State, is a heartless murderer or a killer is false.

”If he was, I would be the first to say so. The truth is that he has always been on the side of his people. Same with Gov. Umahi, Gov. Obiano, Gov. Ayade, Gov. Udom, Gov. Makinde, Gov. Fayemi, Gov. Matawalle, Gov. Oyetola & Gov. Tambuwal.

“Had it not been for the efforts of these leaders far many more people would have been killed in their respective states over the last few years by forces that are utterly heartless and evil. I know the role they played to save lives and protect their people even though much is not known to the public,” he said.

According to Fani-Kayode, if they were evil, he would be the first to say so and would attack them openly and forcefully.

“There are some good Governors and there are some bad ones. These ones are amongst the good. They are not amongst those Governors that horde food & Covid 19 palliatives or that are ready to kill their own people or crush them simply for protesting or conducting demonstrations.

“We know those who do that sort of thing and that have innocent blood on their hands. Those that are spreading lies about Ugwuanyi and the other Governers that I listed here and that are using the #EndSARS agitation to undermine their integrity and destabilise their states are cruel and misguided. Not every leader is bad, not every Governor is evil and not every politician has failed,” he added.