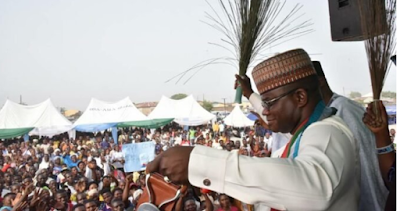 Yahaya Bello, governor of Kogi, has ”imported” a violence-charged chant into Ondo state ahead of the governorship election in the state.

The election in the south-west state is scheduled for October 10.

Bello, a member of the All Progressives Congress (APC), was chairman of the party’s governorship primary election committee in Ondo.

The committee organised the primary election which produced Rotimi Akeredolu, incumbent governor of the state, as the party’s candidate.

Speaking at the APC mega rally in Akure, Ondo state capital, on Wednesday, Bello raised the chant which incites violence.

Delivered in a local language, the chant appealed to the people to vote Akeredolu for a second term in office and that those who refuse to do so may face consequences.

Bello did a similar chant during his re-election campaign in Kogi. The song became popular among the electorate as women sang it across the streets.

The Kogi election was considered turbulent as local and international observers condemned widespread violence during the poll.

A Peoples Democratic Party (PDP) woman leader was killed in the state during the election.