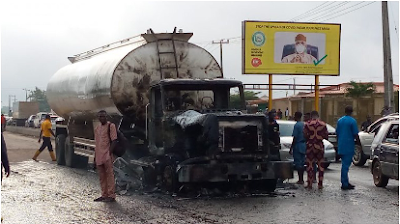 A truck loaded with about 50,000 litres of Premium Motor Spirit (PMS) had caught fire in front of the Governor’s Office, Oke Mosan, Abeokuta, the Ogun State capital, on Saturday.

It was learnt that the tanker was coming from Forte Oil, Ijora and was enroute Mobil, Adatan, in Abeokuta metropolis.

The driver, Nurudeen Yusuf, told newsmen that he, alongside his two motor boys discovered a spark from the engine, which resulted in the fire outbreak.

Our correspondent gathered that the occupants of the tanker had been evacuated by men of the Fire Service, stationed at Oke Mosan.

As the truck went up in flames, the firefighters raced to the scene to put out the fire, thereby averting what could have been a disaster, it was learnt.

In his words, the leader of the Federal Fire Service at the scene, DSF Sodiq Atanda, said it took the timely intervention of his men to put out the fire before it got to the body of the truck which could have had more damaging impact.

“If not for the proximity of our station and the timely intervention of our men, this situation would have been worse,” he said, wondering why the truck did not have a fire extinguisher.