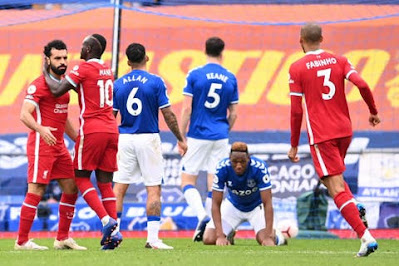 Liverpool defender Virgil van Dijk had to be substituted after suffering an injury in the first half of the Merseyside derby against Everton at Goodison Park.

Everton goalkeeper Jordan Pickford raced out of his goal and clattered the Netherlands centre-back knee-high in the eighth minute with Liverpool leading at the time through Sadio Mane’s third-minute strike.

However, Pickford was saved from conceding a penalty – and possibly being shown a red card – by a marginal VAR decision which ruled Van Dijk’s shoulder was offside.

Rules state only violent conduct can warrant a red card with the ball essentially dead due to the offside and the incident, classed as serious foul play, therefore cancelled out by the offside.

Everton benefited further as Liverpool’s defensive linchpin was unable to continue with Van Dijk replaced by Joe Gomez after just 10 minutes with his presence sorely missed as the hosts equalised in the 20th minute.