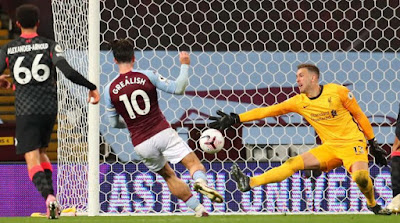 It was an embarrassing night for Liverpool which had a flying start to the league and had not lost and it was the biggest night for the homers.

Despite having 69 percent of ball possession, Liverpool could do nothing with it.

Ollie Watkins was Villa’s hero, grabbing a hat-trick in the match.

He opened scoring for the homers as a mistake from the defence gifted him a chance, he kept his cool and rolled the ball into the net from close range on 4th minute.

Watkins got a brace on 22 minutes, weaving his way past opponents, and unleashed a magnificent effort from the edge of the box into the top right corner. Adrian had no chance of reaching it.

Mohamed Salah pulled one back for Liverpool, as he was in the right place at the right time to get to the rebound inside the box and gleefully rifled the ball into the top left corner to make it 2-1.

Villa made it 3-1 on 35th minute. John McGinn tried his luck from the edge of the box and his shot took a deflection and went past the stranded Adrian.

On 39th minute, Trezeguet sent a superb cross into the box. Watkins latched on to it and from close range planted a header inside the right post, leaving Adrian beaten. He got his hat-trick on the night.

It was 5-1 for Villa on 55th minute. Jack Grealish passed the ball to Ross Barkley and he fired in a shot from the edge of the box which is deflected. Adrian couldn’t do anything about it.

Liverpool scored their second goal of the match on 60th minute. Roberto Firmino passed to Mohamed Salah, who collected the ball and unleashed a terrific shot from the edge of the box. His effort went inside the right post.

Villa made it 6-2 on 64th minute. Watkins passed the ball to Jack Grealish and he fired in a shot from the edge of the box which is deflected into goal.

Villa completed Liverpool’s rout with their 7th goal of the match on 75th minute. After receiving a pass, Jack Grealish unleashed a shot straight into the bottom left corner to grab his brace of the game.

It was an embarrassing defeat for Liverpool.