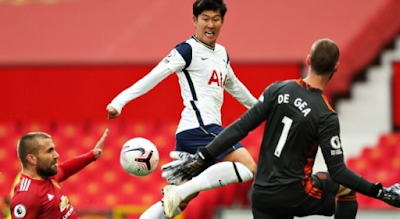 The Red Devils conceded four first half goals for the first time in English Premier League (EPL) history, while it was also the first time in nine years that United would concede six times in the league, following defeat via a similar scoreline at the hands of Manchester City in October 2011.

Man United got the perfect start with a penalty in the first minute when Anthony Martial was brought down by Davinson Sanchez, and Bruno Fernandes stroked in the spotkick for a 1-0 lead.

Tottenham, however, responded with two goals in three minutes as they were heavily helped by atrocious defending from Manchester United’s comical defenders led by the shambolic Harry Maguire.

The club captain and England international failed to clear an innocuous ball which was picked up by Ndombele who smashed in the loose ball from four yards out for 1-1 in the fourth minutes.

It went from bad to worse for Ole Gunnar Solskjaer’s men who had Anthony Martial sent off for retaliation, after the French striker was provoked by Erik Lamela, with the Argentine midfielder falling like a pack of cards from the slightest touch.

Jose Mourinho’s team fully capitalised with two more goals before the interval, with Kane pouncing on further comical approach in defence to steal the ball off Eric Bailly, exchange passes with Son before burying his shot into the bottom corner.

Son completed his brace six minutes later when he buried Serge Aurier’s cross at the near post for 4-1 lead to Tottenham at the interval.

The North London side continued from where they left off, scoring their fifth goal six minutes after the interval through Aurier. The Ivorian, who totally dominated the right flank, was found in the area and his drilled flew across United’s keeper for 5-1.

Uninspired and putting in one of their worst performance in years, Man United folded and Paul Pogba brought down Ben Davies to gift Tottenham a penalty kick that Harry Kane dispatched for his second goal of the match.