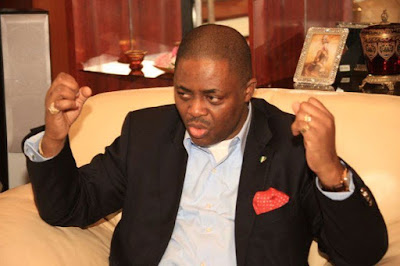 Former Aviation Minister and chieftain of the Peoples Democratic Party, PDP, Femi Fani-Kayode, has taken a swipe at Hillary Clinton and Joe Biden for criticizing President Muhammadu Buhari over the use of army against the End SARS protesters at the Lekki toll gate in Lagos.

It was reported that the former United States presidential candidate in a tweet via her Twitter account urged President Muhammadu Buhari and the Nigerian Army to stop the killing of protesters.

Also, the United States presidential candidate in the forthcoming presidential election, Joe Biden had condemned the violent crackdown by the military on protesters in Nigeria.

He however, urged the government to handle the situation well, adding that the United States stands with Nigerians who are peacefully seeking for a police reform and an end to corruption in their democracy.

Reacting, Fani-Kayode in a tweet via his Twitter account blasted Clinton and Biden alongside their former boss, Barack Obama for being hypocritical towards the ongoing chaos in the country.

According to him, they foisted a homicidal maniac, a cruel tyrant & a monster on Nigerians by working against ex-president Goodluck Jonathan’s re-election.

“They should shut up and go jump in the lagoon. They & Barack Obama supported Buhari in 2015 & did all they could to stop GE Jonathan from being re-elected.

“They foisted a homicidal maniac, a cruel tyrant & a monster on us,” he said. 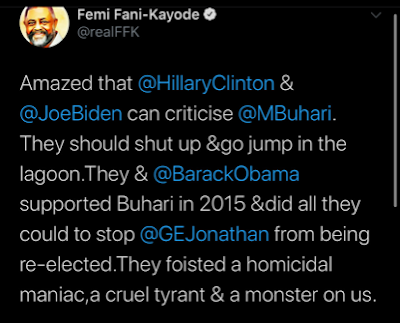