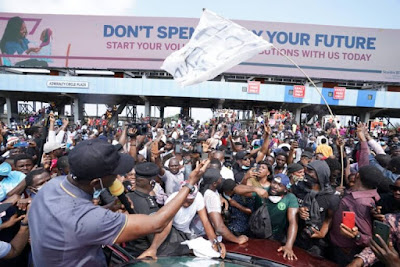 Babajide Sanwo-Olu, governor of Lagos, and Seyi Makinde, his Oyo counterpart, have reacted differently to the #EndSARS protests.

Aggrieved Nigerians have taken to the streets over the brutalisation and killing of innocent people by some operatives of the Special Anti-Robbery Squad (SARS).

In the Ogbomosho area of Oyo, one Jimoh Isiaka was shot dead during the #EndSARS protest, on Saturday.

An unspecified number of protesters were reportedly killed, still in Ogbomosho, on Sunday.

In Lagos, two protesters were reportedly killed by the police in the Surulere area of the state, on Monday.

Despite video evidence, Muyiwa Adejobi, spokesman of the Lagos state command, said he was only aware of three policemen who were lying in the hospital after being shot by “fully armed protesters”.

Although Mohammed Adamu, inspector-general of police, announced a ban on SARS after the nationwide outrage,  protesters have refused to leave the streets, demanding police reform and the release of all arrested protesters.

Major roads were blocked in Lagos and Oyo on Monday, worsening the traffic situation.

In a statewide broadcast, Makinde condemned the killing of innocent people, asking the police “to take a back seat” while other security agencies monitor the protest.

“I cannot imagine the pain and frustration of the parents or families of those who have died or are hospitalised as a result of the action of the Nigeria Police Force during this EndSARS protest,” Makinde said.

“As I stated clearly in my earlier statement, peaceful protests are a legitimate way for citizens to make their grievances known to the government, and it is totally unacceptable for anyone to be hurt during such protests.

“Therefore, we have deployed members of operation burst to the hot spots, especially Ogbomosho, to ensure that as people protest, they will not be harassed or brutalised. To the protesters, I say continue to protest peacefully. These are trying times and I pray that God will give us the wisdom to navigate this.”

But in a series of tweets on Monday, Sanwo-Olu who had earlier addressed the protesters in the Lekki area of the state, begged aggrieved residents to take a break in order to douse tension.

He said he would discuss the way forward with President Muhammadu Buhari on Tuesday. 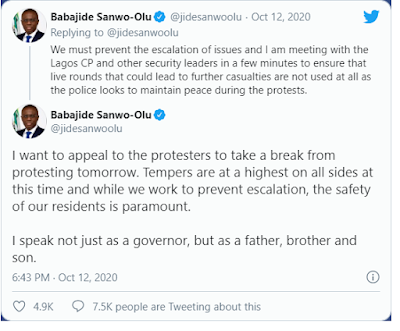 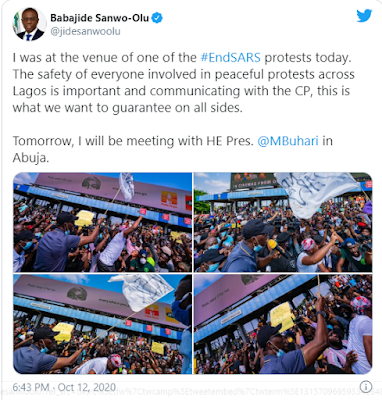 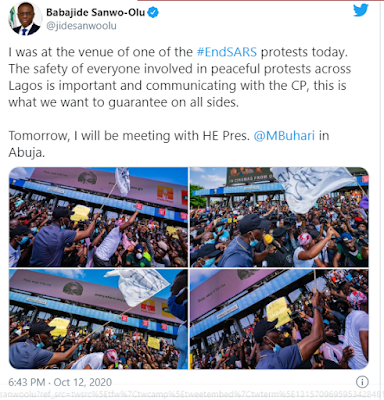 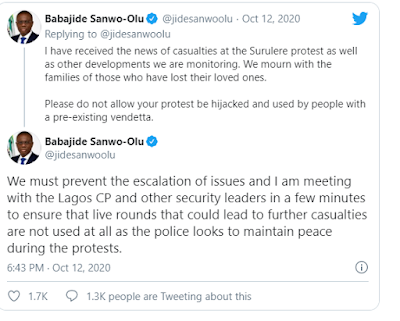