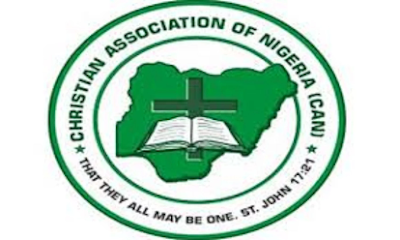 The Christian Association of Nigeria (CAN) has urged President Muhammadu Buhari to urgently reform the Police.

The President, Samson Ayokunle, in a statement on Monday, commended End SARS protesters and youths advocating against Police brutality.

He said CAN was monitoring the End SARS protests nationwide and was praying that their unprecedented efforts will not be in vain.

The body called on the military and the police to exercise restraint to avoid deaths and severe injuries.

CAN urged the federal government to inaugurate a judicial panel with representatives of the civil society and ensure all rogue officers are punished.

The religious organization told Buhari to send a bill to the National Assembly for the compensation of all victims of the Police brutality and extrajudicial killings.

“Semi-literates should never be recruited into the Police again. Well-educated, morally and mentally sound people are good enough to wear police uniform in Nigeria.

“All tiers of the government should stop paying lip service to the welfare of the people and immediately begin welfare programmes that will bring succor to the suffering masses.

“State governors and the FCT Minister should set up a committee to dialogue with the representatives of the protesters to douse tension in the country.

“The Inspector General of Police should suspend the implementation of the establishment of SWAT. All officers who were members of SARS should be screened to unmask the rotten eggs.

“The government should wake up now and provide a future for our youths through provision of gainful employment or enabling environment for their employment”, Ayokunle added.