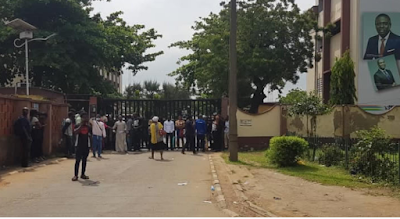 Youths protesting against police brutality and bad governance in Nigeria have blocked entrances into the Lagos State Secretariat, Alausa.

A civil servant told our correspondent that he was sent back from the gate by the protesters.

Another worker, identified simply as Akin, said some civil servants are currently locked inside several offices.

He noted that many civil servants are also currently stranded, awaiting directives from their bosses on the next line of action.

“I have successfully been allowed to go out after we begged the protesters. We thought they only shut one of the gates. But later realised that all the entrances have been shut. When I got to the gate opposite Alausa Mosque, they were there. I went back to use the one at Adeyemi Bero Auditorium but also found them there.

“They have blocked the one near the Deputy governor’s office since the protest started at the Lagos Assembly because of proximity. Some of my colleagues are currently stranded. Those of us outside are begging the protesters to allow them to come out.”

Another civil servant, who works with the Ministry of Agriculture, said some of his colleagues were sent back from the gate.

“Those sent back already called to give us a situation report. They told me the gates have been shut but the protesters are not many yet,” he said.

It was gathered that the protesters have also blocked major roads at Alausa and its environs, including the Governor’s road.

An official of the Lagos Internal Revenue told our correspondent that his colleagues found it difficult to get to work.

“I had to trek long distances to get here. They blocked the road from Coca-Cola, Abiola Garden, and Allen road,” he said on the telephone.