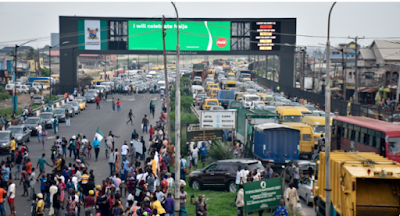 The bridge, which connects the mainland part of the state to the island, is one of the busiest in the country.

Around 5:30pm on Friday, protesters chanting “End SARS!” prevented free flow of traffic on one section of the bridge, leaving people who are returning from work stranded.

As of the time of filing this report, both sections of the bridge, which is undergoing repairs, were blocked.

Blocking major highway across the country is one of the ways the protesters have used to catch the attention of the country.

Although Mohammed Adamu, inspector-general of police, disbanded SARS on the fourth day of the demonstration, protesters have refused to leave the streets.