#EndSARS Protesters fight themselves over Gov. Okowa’s largesse in Delta 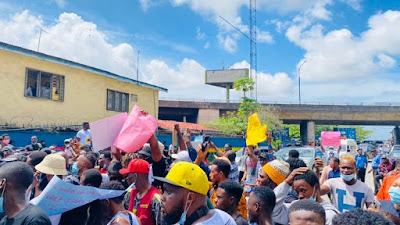 The governor had appreciated the protesters after addressing them at Government House, Asaba, the Capital of Delta State.

Dailpost reports that the protesters engaged in physical combats to the point of hurting themselves over the money that was allegedly given to them.

Reports say the Police did not intervene in the fight or make attempts to calm the situation.

One of the protesters in a bid to cheat his colleagues grabbed a large chunk of the money, scaled the Government House fence and escaped from the scene

The Delta State Commissioner of Police, CP Mohammed Hafiz Inuwa in a telephone chat with our correspondent in Warri said the End SARS protest continued the dissolution of the notorious police unit.

He said, “Yesterday, we had a peaceful protest. The governor even spoke with them.”

There were protests calling for the rejection of the newly created SWAT and an end to SARS in Warri and its environs today and in Agbor near the governor’s hometown.