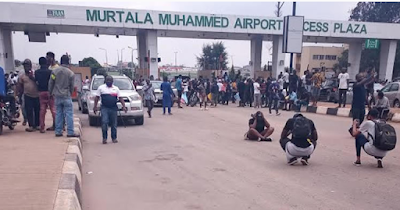 Protesters on Monday blocked the entrances of the Murtala Muhammed Airport and National Stadium Surulere in a bid to express their grievances against police brutality and extortion in the country.

During the protest, the youths blocked the Murtala Muhammed Access Plaza displaying placards with various inscriptions.

Some of the protesters marched from Computer Village via Along Bus Stop to the airport.

They caused an obstruction of movement and delayed vehicles from accessing the airport through the plaza.

It was gathered that the protest began at 10 am.

They blocked motorists trying to access the Local airport by setting up their stand at the Murtala Mohammed Airport Access Plaza, thereby causing gridlock at the roundabout.

Many intended travellers had to find alternative means of transportation.

Singing songs of solidarity, they carried placards with inscriptions such as “iPhone no be gun”, “SARSMUSTEND”, “Chibuike Amana deserves justice”.

Several motorists, who expressed their frustration at the gridlock, said they have been stuck in the traffic for close to two hours.

A truck driver, Olaniyi Abubakar said, “I am going to the local airport to supply cement and they are calling me. I have been stuck for an hour and I am just here trying to explain why. They have been calling me.”

A commercial driver, Igwe Justus, added, “The protest is in order because we are living in a democratic society. We are even supporting them. It is good. What they are doing is the right thing.”