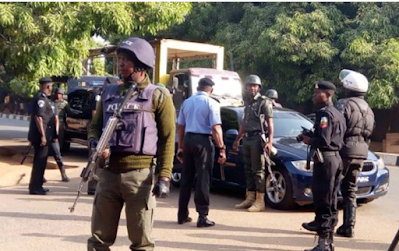 Nigeria Police officers have beaten up a number of End SARS protesters.

This occurred four days after the Inspector General of Police, Mohammed Adamu, warned against use of force.

Adamu stated that “the fundamental right of freedom of expression, assembly, and movement must always be upheld and protected by the police”.

Some of those attacked on Monday were carrying the Nigerian flag.

The belief was that anyone carrying the country’s symbol would be spared of assault by security operatives.

That has now been discarded by overzealous personnel.

The assault by the Police occurred in at least two locations of the nation’s capital and Nyanya.

Nyanya is a town in Nasarawa State near the border with the Federal Capital Territory (FCT).

Police hve not just dispersed us, but they r beating us at Nyanya right now. We tried 2 report 2 dis police man here, but they beat us in his presence. I was whipped for bringing out my phone. This can't be in vain.#EndSARS #EndPoliceBrutalityinNigera #EndBadGoveranceInNigeria pic.twitter.com/GZYPIjJCHk

Look at Police Officers beating peaceful protesters in Abuja. They have just flags and cardboard papers yet they are being beaten the same police men the IGP apparently said he ordered not to attack peaceful protesters. This is shameful.#IGPMustResign #AbujaProtests #EndSARS pic.twitter.com/5u5u76qlEo