#EndSARS: Outrage in South Africa over police brutality in Nigeria 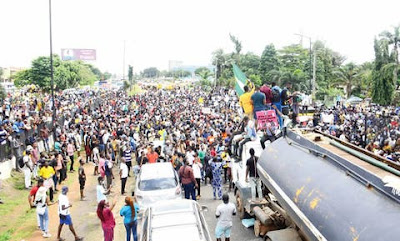 Hundreds of people took to the streets in South Africa on Wednesday to voice outrage at the shooting of peaceful demonstrators in Nigeria.

Africa’s most populous country has faced growing unrest as a protest over brutality by a Nigerian police unit known as SARS ballooned into wider grievances against the government.

Witnesses said gunmen opened fire on a crowd of over 1,000 people in the main city of Lagos on Tuesday, with Amnesty International reporting that several people were killed.

Another group of about 400 people in Cape Town, mostly Nigerian nationals, vowed to continue picketing until there was a change in Nigeria.

Well-known South African rap star AKA voiced solidarity with the people of Nigeria, saying: “How can people shoot to KILL their own countrymen and women?”

“This is insane… Sending love and strength to Naija,” AKA tweeted to his 4.6 million followers.

South African opposition party, the Economic Freedom Fighters, pledged its “moral and political solidarity” with Nigerians and called on the government to rein in its army and security services.

“The EFF salutes the young lions of Nigeria in their resolve to graduate their successful fight against police brutality under the banner of #ENDSARS,” it said in a statement.

The Congress of South African Trade Unions condemned the crackdown, saying the accumulated anger of citizens over decades of failure in the delivery of basic social services and endemic corruption, was “visible in the pent-up anger, which has been boiling over in mass street protests in cities across the country”.

Both groups called on the African Union and the Economic Community of West African States to send a strong message to Nigerian President Muhammadu Buhari to immediately end the crackdown on protesters.

South Africa and Nigeria are the economic giants of Africa, competing for sporting prowess, cultural dominance, and economic strength.