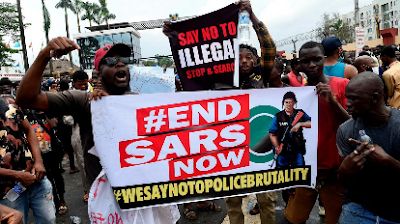 A rights group, International Society for Civil Liberties and the Rule of Law (Intersociety) says 200 persons have so far been killed in the End SARS protest within the first two weeks.

A report by the group signed by its Chairman Board of Trustees, Mr Emeka Umeagbalasi and made available to newsmen in Awka gave a detailed account of those killed and their locations.

Part of the report reads, “From general information obtained across the country, Intersociety is estimating credibly that no fewer than 200 defenceless End SARS protesters were killed by soldiers and police personnel and pro-Government hoodlums.

“The killings took place between 7th Oct when the protests started in Lagos and Friday, 23rd Oct 2020. Military terror is still being reported in Abia, Ebonyi and Rivers States and with the latest ‘use maximum force’ order issued by IGP, Abubakar Adamu, death tolls are expected to rise further across the country particularly in South-South and Southeast in coming weeks,” the report said.

The report stated that the protest was further fueled by the shooting to death of between 15 and 20 defenceless citizens at the Lekki Tollgate and injuring of dozens as well as the discovery of COVID-19 palliatives, hoarded in several Government Emergency Aid warehouses.

Breaking down the number of persons killed, Intersociety said, “At least 50 defenceless citizens were killed in different parts of Lagos including Mushin (at least 17 deaths), Lekki (between 15 and 20 deaths), Ikorodu (at least six deaths), Ketu (at least two deaths), Orile (at least three deaths), Alausa, etc.

“In South-South, Rivers and Edo topped the list with not less than 25 deaths. Multiple dozens of defenceless citizens, numbering not less than 50 were also reportedly killed by soldiers and police personnel in Abuja (at least five deaths), FCT, Oyo Ogun, Ondo, Kano, Plateau and others.

“The number of protesters killed by pro Government’s Islamic hoodlums across the North is between 15 and 20. They included four killed at Sabon Gari in Kano and six killed in the Apo Mechanic Village, Abuja, FCT,” the report stated.