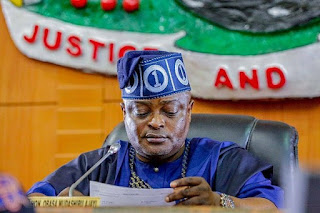 The Economic and Financial Crimes Commission (EFCC) has released Mudashiru Obasa, speaker of the Lagos state house of assembly, from its custody.

The anti-graft agency released him on bail on Friday after he complained of feeling sick during interrogation.

The EFCC confirmed to TheCable on Thursday that it had begun questioning Obasa over allegations of corruption brought against him.

Obasa was accused of embezzling public funds and using his office to misappropriate funds and allocate contracts to himself through third party sources.

TheCable reports that Obasa became overwhelmed during interrogation after he was confronted with damning evidence.

He was said to have complained of feeling sick and was subsequently taken to the EFCC clinic for medical attention.

He was then released on bail and asked to return on Monday.