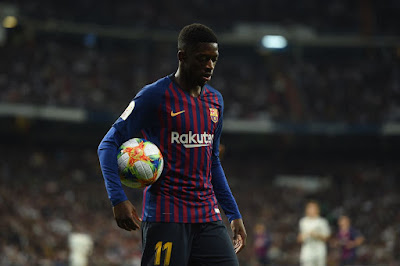 Barcelona star, Ousmane Dembele, will only move to Manchester United if the Red Devils can give him a long-term contract, according to The Times.

Dembele had drawn the interest of Man United in the past few weeks.

The forward could become a Man United player before this summer transfer window shuts on Monday night.

Ole Gunnar Solskjaer’s side have been trying to negotiate a loan deal with Barcelona for Dembele.

Dembele is expected to cost Man United around £65m to sign on a permanent deal.

The 23-year-old is down the pecking order under Barcelona manager Ronald Koeman’s squad, with Ansu Fati and Philippe Coutinho currently shining alongside Lionel Messi in Barca’s attack.

Speaking about Dembele’s future amid interest from Man United, Koeman told reporters recently that he trusts the player.

“I’m counting on him. But these are decisions for the club and the player.”

Dembele joined Barcelona in 2017 from Dortmund in a £135.5million deal.