Buratai on #EndSARS protests: We only ensured compliance with curfew 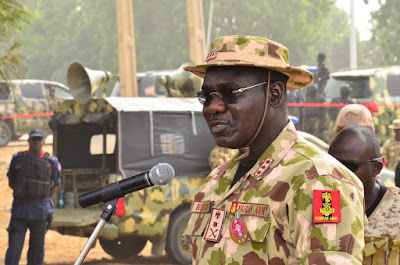 Tukur Buratai, a lt-gen and chief of army staff, says soldiers only tried to enforce compliance with the curfew imposed during the #EndSARS protests.

He said the army is now being “falsely” held responsible for the “activities of the miscreants”.

Although Buratai did not specifically mention the Lekki shooting, it was on the day that Lagos state government imposed a 24-hour curfew that men in army uniform invaded the protest ground and opened fire at protesters.

There are disputed claims on fatalities from the shooting.

At a conference with army commanders in Abuja on the #EndSARS incident on Monday, Buratai accused some international organisations of threatening military officers with travel ban over alleged violations of human rights.

According to a statement released by Sagir Musa, a colonel and acting director of army public relations, Buratai said right from the onset of ENDSARS protest, “the NA (Nigerian Army) has been aware of the grand design by the sponsors of the protests to draw it into the crisis.

“The plan was to embark on massive propaganda to discredit the military and the government so as to set the people against the NA once it is called out to aid the civil authorities. The NA being aware of the devilish plan was careful not to be dragged in and issued the initial warning through a press release on 14 October 2020 of our resolve to secure and safeguard a United Nigeria.

“Now the detractors alongside their local and international collaborators have mischievously and deliberately misrepresented troops’ efforts to ensure compliance with the curfew imposed by legitimate civil authorities in Lagos and other states.

“These agitators are falsely accusing the NA of being responsible for the activities of the miscreants despite glaring evidence to the contrary. They have continually threatened to report the NA to the International Criminal Court (ICC) and also threatened various forms of sanctions against personnel and their families.

“Thankfully however, a large percentage of Nigerians and the international community have started seeing through the smokescreen of falsehood and deliberate misrepresentation of facts being orchestrated by enemies of Nigeria and have retracted their earlier false publications.”

Buratai said: “Criminal elements are threatening us with travel ban but we are not worried because we must remain in this country to make it better.

“The first time I travelled outside of this country, I was already 50 years and a general, so I don’t mind if I live the rest of my life here.”

It is not clear yet which of the international organisations issued the threat.

Some Nigerians had called on the international community to place a visa ban on those responsible for the shooting of peaceful protesters.

The army chief said they will not allow any agent in or outside Nigeria to set the country on fire.

He said the army remains resolute in doing everything possible to ensure that ”subversive elements, detractors and other enemies of Nigeria do not achieve their aims and objectives of destabilisation”.

“The events of the past few days in our dear nation have shown the determination of some unscrupulous individuals and groups to destabilise Nigeria by all means,” he said.

“These individuals, groups and other undesirable elements have hijacked the peaceful #EndSARS protest marches resulting to widespread violence, acts of wanton destruction and looting of public and private properties in many parts of the country. These acts led to the imposition of curfew in several states of the federation.

“Despite all these, the army has continued to exercise restraint  applied all the principles of internal security operations and fully abided by the internationally recognised rules of engagement as contained in our published standard operating procedures for internal security operations which are derived from the International human rights laws and are in accordance with the international principles guiding the use of force.”