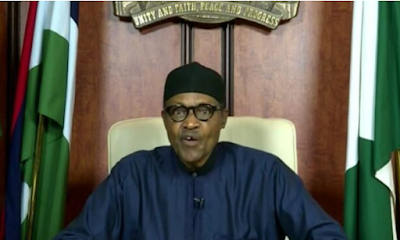 President Muhammadu Buhari has announced a new price for the pump price of petrol in the country.

Buhari said fuel will now be sold at N161 per liter in Nigeria, noting that other nations such as Ghana, Niger, Chad Saudi Arabia and other oil-producing countries sell petrol on a higher prices than Nigeria.

He lambasted the previuos governments from 1999 to 2015 for criticising his administration when they allegedly presided over the near-destruction of the country.

Buhari, in his nationwide broadcast to mark the Independence Day celebration, said no government in the past did what his administration is doing with such scarce resources.

Buhari said his government has managed to keep things going in spite of the disproportionate spending on security.

He said that the past administrations lack the effrontry to criticise the current administration because they had the opportunity to develop and take the country to a greater height.

“Those in the previous Governments from 1999 – 2015 who presided over the near destruction of the country have now the impudence to attempt to criticize our efforts,” he said.

Buhari said that in the circumstances, a responsible government must face realities and take tough decisions.

“Petroleum prices in Nigeria are to be adjusted. We sell now at N161 per litre. A comparison with our neighbours will illustrate the point;

“Chad which is an oil producing country charges N362 per litre

“In Ghana, another oil producing country, petroleum pump price is N326 per litre.

Buhari noted that for the country to grow and achieve great things Nigerians need to solidify their strength, increase their commitment and encourage themselves to do that which is right.

Recall that the Nigerian government through the Petroleum Products Marketing Company (PPMC) had announced a new ex-depot price of N151.56 for petrol.