BREAKING: Violence breaks out in Abuja community amid #EndSARS protests 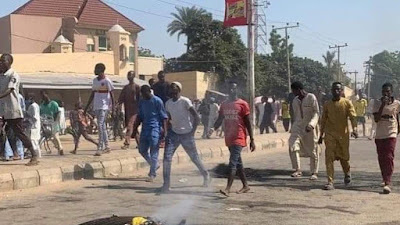 Many people have been reportedly injured following a fresh breakout of violence around Kabusa-Apo mechanic village in Apo district of the federal capital territory (FCT).

The development is coming about a day after some hoodlums attacked protesters and businesses in the Kabusa vicinity.

A number of people were injured and cars destroyed in the process. From Apo resettlement, an area close to Kabusa, thick black smoke could be seen billowing.

The mayhem began about the same time some citizens resumed their daily demonstrations against police brutality. The police have been accused of supervising the violence in the community.

In the past 11 days, some Nigerians have taken to the streets to call for reforms in the police.

On a number of occasions, the protesters have been confronted by thugs and police officers who resort to flogging or using teargas to disperse them.

Speaking on Tuesday, a resident of Apo, said the atmosphere is tensed and  that many people have fled to smaller settlements around Kabusa for safety.

“There is violence here. It started about 8:00am and a lot of people are fleeing for their lives to smaller,” he said.

“As we speak property have been destroyed again. It is a terrible situation here.”

The Nigeria Governors’ Forum (NGF), Senate President Ahmad Lawan, and Bola Tinubu, former Lagos governor, are among those who have called on the protesters to discontinue their demonstrations and dialogue with government.