BREAKING: ‘Seven shot’ as another police station is razed in Lagos 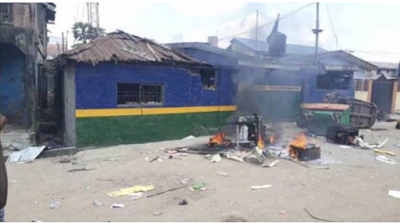 At least seven persons have been shot in Ajangbadi, a community in Ojo local government area of Lagos state.

According to witnesses, two of the victims died in the hospital.

Trouble started after suspected hoodlums attempted to overrun the station.

“Some angry youth who overpowered the police and burnt down Ojo police station marched to Ajangbadi but the police at Ajangbadi station were at alert,” a resident, who craved anonymity said

“I know one of the persons who was shot. He stays on my street. The guy, who was a bricklayer, died in the hospital. Another person who lives opposite my house was shot on the leg.”

It was gathered that aggrieved youth burnt down Ojo police station after a confrontation with policemen on Tuesday afternoon.

At least six police stations have been torched across the country on Tuesday.

The #EndSARS protests which started peacefully have taken a violent turn in different parts of the country.