BREAKING: Sanwo-Olu to compensate victims of EndSARS protest with N200m 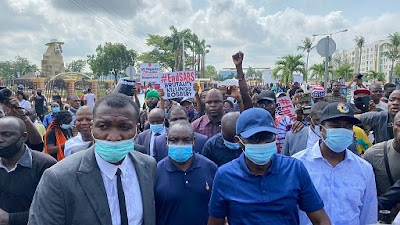 Lagos State Governor, Babajide Sanwo-Olu  on Tuesday said his government has earmarked N200 million as compensation for families of victims of #EndSARS protest in the state.

The protesters had occupied the entrance to the Lagos State House of Assembly to demand that SARS must go.

The governor further promised to convey the request of the protesters to President Muhammadu Buhari some of which are increment in police salary as well as Justice for those killed by the police during the protest.

Sanwo-Olu had also addressed the protesters who thronged the Lekki Toll Gate on Monday to protest.

All across Lagos on Tuesday, the #EndSARS protest continues as protesters blocked the roads and make life unbearable for motorists.

But the protesters in Alausa on Tuesday did not block the road, but ensured that there is free-flow of traffic in the area, unlike Monday when the Alausa vicinity was shutdown by protesters.