BREAKING: Many injured as police open fire on #EndSARS protesters in Abuja 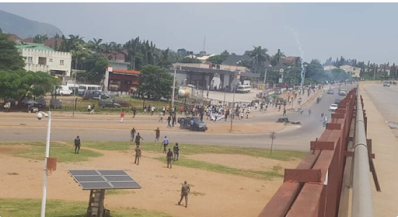 Some #EndSARS protesters sustained injuries when policemen fired live bullets and teargas to disperse them at AYA junction in Abuja on Monday.

The protesters had been marching to different parts of the city before the police intercepted them along Mararaba-Nyanya road at AYA roundabouts.

A female protester bearing national flag was assaulted when the police forcefully seized it from her.

At least three officers charged at her and hit her with their batons.

For more than 11 days, some residents of the nation’s capital have been taking to the streets to call for a reformation of the police and demand improved welfare.

The demonstrations were initially targeted at the special anti-robbery squad (SARS) but they have continued despite the dissolution of the unit by Mohammed Adamu, inspector-general of police (IGP).

The protesters have vowed that they will not leave the streets until their demands are implemented.

One of their demands is the prosecution of police officers involved in extrajudicial killings.

On Sunday night, protesters converged on the head office of the Central Bank of Nigeria (CBN) in Abuja.

Subsequently, soldiers and policemen were deployed in various parts of the nation’s capital.

The Nigeria Governors’ Forum (NGF) and Senate President Ahmad Lawan have called on protesters to discontinue their demonstrations, assuring them that their demands would be met.