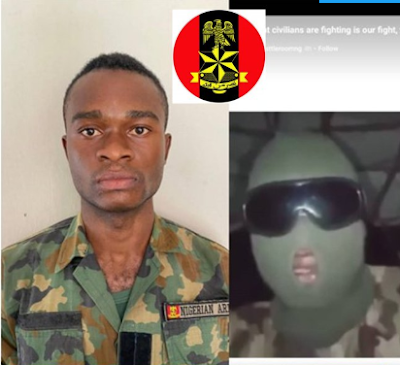 Harrison Friday, a lance corporal of the Nigerian Army who has been supporting citizens calling for an end to harassment and brutality by the police, , has been charged with cybercrime.

In the last 13 days, some citizens across the country have taken to the streets to call for a reformation of the police.

The protesters have vowed not to leave the streets until their demands are met.

In lending his voice to the protests, Friday had recorded a video where he appealed to his colleagues not to take orders that would harm citizens.

I wish all Nigerian Soldiers are smart as this man here. Hope this get to everyone of them. #Endsars #EndBadGoveranceInNigeria pic.twitter.com/WaGYTmIVng

“My advice goes to every fellow soldier, you guys should not be fooled or used, we are the youths. The fight of every civilian is our fight,” the lance corporal said in a video where he masked himself.

“My advice goes to the new people in the system, I’m talking about 19 and 20 NA. For this struggle they will deploy you. I’m hearing rumours that want to deploy some soldiers to scare the protesters. Remember, if you people are deployed, if you take an unlawful order and your fire and you fire a civilian, people you are firing – remember the bullet may go and hit your brother or your sister.

“Remember that the fighting that these people are fighting is our fight. If Nigeria is ok, nobody will fly out of the country. Soldiers have run away from this job, some to Dubai, seeking for greener pastures.

“If every soldier is well paid, every civilian is well paid. Nobody will leave the country.”

However, the army said Friday has been hiding “behind the mask to commit cyber crimes.”

In a tweet on Wednesday, the army said the soldier’s arrest is part of operation ‘ Crocodile Smile.’

The hooded soldier has been apprehended pic.twitter.com/XIW1NvaW5L

Do they actually know the meaning of "Cyber Crime" ?

The strength and glory of any military anywhere is in their defence of the sovereignty of a nation and defence of lives and properties of the citizens. Honestly, Nigerian armed forces have lost the confidence and support of the people. God almighty will punish the leadership sure

You finally found a scapegoat. Mtchewww

How does the shape of the head match!!!! Look for another lie! Abi the mask press that side of e head wey swell!!????

Can the same operation Crocodile Smile VI cyber operations be conducted to identify the uniform personals in this video? #EndBadGoveranceInNigeria #LekkitollgateMassacre pic.twitter.com/GrJpp8ORZp

you said he was a fake soldier now, una no even get sense atall