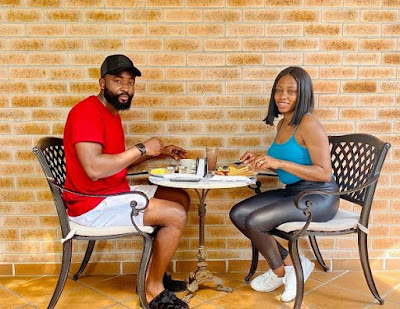 The reality TV stars took to their individual social media pages on Thursday to pen lovely messages to each other.

Gideon shared a photo of himself and Kareem having breakfast together and accompanied the picture with a terse post wherein he described her as “wife”.

“Breakfast with the wife @KhafiKareem,” he wrote.

Less than an hour later, Kareem put up a picture on her Twitter page wherein she referred to herself as “somebody’s wife.”

Their posts have since fuelled a plethora of reactions on Twitter, with a number of Nigerian users concluding that the lovebirds might have tied the knot.

Khafi and Gedoni privately got married without any announcement. The kind of thing I can do 😍😍

Congrats to them both 🎉🎉

Wait though, Gedoni and Khafi got married? Like fr?

In December 2019, Gedoni had proposed to Khafi while they were both away on a vacation in Cape Verde.

On April 4, the lovebirds cancelled their wedding due to the COVID-19 pandemic.

Gedoni is a fashion entrepreneur while Kareem is a London-based policewoman who hails from Ekiti state.

The two former housemates featured in the fourth edition of the reality TV show which was eventually won by Mercy Eke.