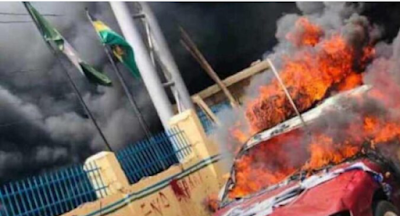 Some aggrieved persons in Ibadan, Oyo state capital, have set the Ojoo Police Station on fire.

A witness said that trouble started after the police attempted to disperse a crowd of protesters.

Suspected hoodlums in the crowd were said to have pelted them with stones after which the police reportedly opened fire.

The angry mob was said to have outnumbered the policemen who beat a retreat before the aggrieved persons broke into the station and set it on fire.

Many vehicles inside the station were also set ablaze.

NigeriaEye had earlier reported how the youth mounted a roadblock in front of the police station and forced the police officers to remain inside the station.

At least three police stations across the country have been burnt down in the last 48 hours.

A mob had torched Ugbekun Police Station in Benin, Edo state, on Monday. Earlier on Tuesday, a police station in the Orile part of Lagos was set ablaze.

Violence has disrupted the #EndSARS protests in different parts of the country.

The Lagos and Edo state governments have declared 24 hours curfew to check unrest.