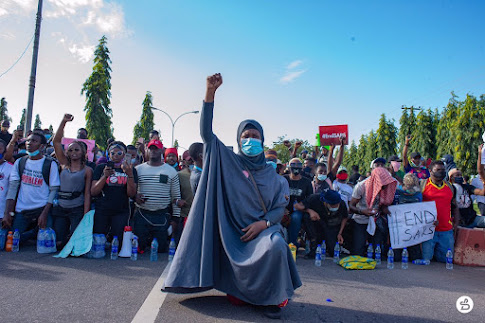 #EndSARS protesters who blocked the Lekki Toll Plaza on Monday rebuffed Governor Babajide Sanwo-Olu’s plea to vacate the road, saying they want President Muhammadu Buhari to come down to Lagos to address them.

Sanwo-Olu had gone to the toll gate to address thousands of protesters who have occupied the road, causing major gridlock and nuisance in the area.

The protesters are demanding an end to SARS operation, which the Inspector General of Police, IGP, Mohammed Adamu had granted by disbanding the unit.

But on Monday, the protesters shutdown the popular Lekki toll plaza from morning till evening.

As Sanwo-Olu came into view, the unruly protesters started chanting that they did not want the governor to speak with them, but that they wanted Buhari to address them physically.

The protesters were largely uncoordinated. They rebuffed pleas to open the road and demanded the physical presence of President Muhammadu Buhari.

The protesters remained unruly but Sanwo-Olu made his point – they should not allow their legitimate campaign hijacked by hoodlums who might have another agenda.

Sanwo-Olu agreed with the demand of the protesters on reforms in the operations of law enforcement agencies, adding that the State Government would work with the police leadership on compensation for the family members of victims of SARS brutality in Lagos.