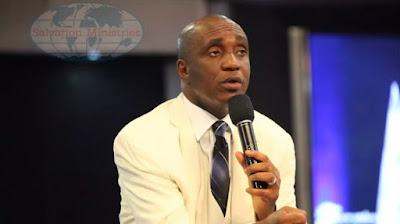 Daddy Freeze, who is popularly known for criticising Nigerian pastors, in his recent post on his Instagram page, attacked Bishop David Oyedepo of Winners Chapel for saying women should submit to their husbands.

Reacting, Pastor Ibiyeomie in a viral video from his Sunday service, cursed the day Daddy Freeze was born, even as he threatened to deal with him if he talks or insults Oyedepo again.

According to the Cleric, ‘He cannot be alive and watch someone insult his father, Oyedepo’.

Nigerian Producer, Samklef took to his Twitter page querying the ‘anointing of God’ on pastor Ibiyeomie.

According to him, a man of God should respect God on the pulpit and not speak in such manner about anyone.

He wrote: “Where is your Anointing man of God? As much as I don’t agree with Daddy Freeze this man (Ibiyeomie) is not a man of God but a man of man.

“How can you speak in this manner from the pulpit you do not even respect God.”

Some Nigerians also took to their Twitter pages reacting to Pastor Ibiyomie’s outburst.

@BrunoPenandes “I was so disappointed watching a prominent pastor swearing.”

@Katakore “How different is this from Yahaya Sharif’s death sentence in Kano for blasphemy? You disrespect my prophet you die, you disrespect my papa in the Lord you die. Same Religious intolerance, different sides of the same coin.”

@Briantega “Hebrew 12:24 ‘Pursue peace with all men, and the sanctification without which no one will see the Lord’ Clowns in pulpit glorified by morons who are lost and don’t have their relationship with God. Why spew hate, if you have an issue with him(Daddy freeze) be a man of God as you claim you are.

@Izekwesu “Daddy Freeze is a clout chaser who stays relevant only by “replying” Oyedepo. Let him do same to Muslim clerics and they’ll have him killed.”

@Walegates “This is a threat of physical harm & murder by Pastor Ibiyeomie on camera in front of his church with people cheering.”

@Ladundun ” They crucified the Son of God.In response Jesus said, “Father forgive them for they know not what they are doing”.

Ask yourself, does Pastor Ibiyeomie sound Christlike?It’s a pity, a Pastor spewing this weight of hate. You’ll think he should know better to love, just as Jesus commands.”

@Basilolemerezi “Just imagine the kind of words coming from a Pastor’s mouth. This video has made me change my mind towards Daddy freeze. Is this Pastor not a racist?

@Ameduchilala “I am a Christian and not a fan of these God of men but truth be said, Daddy freeze to me looks like an antiChrist. Why fighting just pastors and not imams or other religious groups? Why not fight the bad government, Boko Haram stuff and our leaders?

@Paskael “Are we supposed to say he is a Pastor? I believe everything daddy Freeze is getting somewhere with his different views. Is it a crime? It is hitting home and an anointed man of god just called his fellow human being a bastard. What are they teaching their flock?

@Emaudohu “Whatever they call him Daddy freeze or freezer, you better cry for help and repentance because with those curses, your days and reign is counting. All of You can keep holding onto your myopic comments about pastor Ibiyiomie’s declarations, time will tell.”