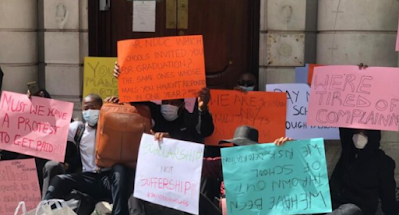 The Niger Delta Development Commission (NDDC) says it is verifying the beneficiaries on its scholarship scheme.

Some beneficiaries of the scheme on Wednesday staged a protest at the Nigerian high commission in London over the alleged non-payment of their fees and allowances by the commission.

In August, President Muhammadu Buhari asked the commission to ensure that the students get their entitlements after they staged a protest.

Reacting to the recent protest, the NDDC, in a statement by Charles Odili, its director of corporate affairs, said it had spent $5.9 million to offset outstanding entitlements owed the students.

The agency said it wonders why an additional demand of $3 million is being made to settle the fees of some students said to not have been captured in its verification exercise.

The commission said it is being “blackmailed to make these additional payments without verification”.

“Recall that recently, the NDDC Interim Management Committee, IMC, released $5,910,000 million through the Central Bank of Nigeria, CBN, to offset all the verified outstanding foreign scholarship obligations, despite the non-passage of NDDC 2020 budget by the National Assembly,” the statement read.

“Curiously, after this payment, a demand for an additional payment of $3million (Three Million Dollars) surfaced, with the claim that some students were not captured. This inexplicable increase made it imperative to verify and authenticate the real beneficiaries of the scholarship programme which started in 2010.

“We call attention to the fact that since the establishment of the IMC, no scholarship has been awarded. So why are we being blackmailed to make these additional payments, without verification?”

The NDDC accused the protesting scholars of mischief.

It asked why the students did not approach Cairo Ojougboh, NDDC acting director of projects, whom it said was in London for the verification exercise of the legitimate students on the scholarship scheme.

“We observe that the students were driven by mischief, otherwise they had the opportunity to present their case to the NDDC Acting Executive Director Projects, EDP, Dr. Cairo Ojougboh, who was in London on Thursday, September 17, 2020, with relevant officers of the Commission, to carry out physical verification of legitimate students on the scholarship programme,” it said.

“The NDDC is committed to the Post Graduate Foreign scholarship Scheme, recognizing that it represents the future manpower and professionals that we are building to help transform the Niger Delta region.

“We have always said that beyond physical infrastructure, the NDDC, as an interventionist agency, has a duty to also develop the human capital that will ensure sustainable livelihoods to the people of the Niger Delta region.

“We, therefore, urge our scholars not to allow themselves to be used as tools by those sponsoring devious campaigns to discredit the on-going forensic audit ordered by President Muhammadu Buhari.

“As should be expected, the verification of NDDC projects and programmes will not leave out the Foreign Postgraduate Scholarship.”