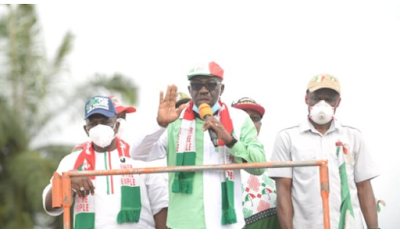 Godwin Obaseki, governor of Edo, says he will bury the political career of Adams Oshiomhole, former national chairman of the All Progressives Congress (APC), in the forthcoming election.

Speaking during the governorship election campaign of the Peoples Democratic Party (PDP) in Oredo local government area of the state on Saturday, Obaseki said the September 19 election is a contest with Oshiomhole.

The governor, who is the candidate of the PDP in the election, said Oshiomhole, his predecessor and former governor of the state, will be dealt with during the election because he doesn’t respect people of the state.

“As a sitting governor, Oshiomhole decides to pick who will represent me in my house of assembly. Can you imagine the insult? That was where this fight started,” the governor said.

“Because he believes, in his own mind, that Benin people are like chickens. When you throw corn, they will run after the corn.

Oshiomhole is backing Osagie Ize-Iyamu, candidate of the APC, in the election.