VIDEO: Nigerian man proposes to girlfriend onboard an international flight 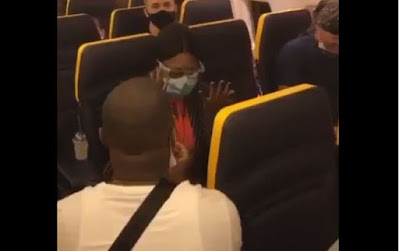 A video wherein a Nigerian man could be seen proposing to his girlfriend onboard an international flight has surfaced online and gone viral.

In the less than three-minute clip, which has since become an internet sensation, the young man pleaded with officials and passengers onboard the flight to do something special for his lover.

The air hostess appeared to have granted his request after which he proceeded to address the passengers, who are predominantly whites.

In his short remark, the man noted that he had been dating his lover, whom he identified as Kemi, for five years.

He also described her as someone special to him while reaffirming his love for her.

“Today is a very special moment for me. To be alive to introduce my girlfriend to you. Her name is Kemi. It’s been about five years we are together. She’s a special person to me. I want to ask her an important question,” he said while been cheered by other passengers.

After his short speech, he proceeded to where his lover was seated and proposed to her with the latter giving him a “yes” in return.

Several Nigerians have since been taking to the social media to comment on the video, with many lauding the novelty of the man’s idea.