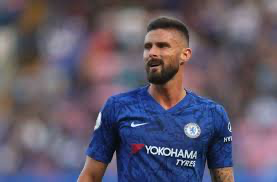 Serie A champions, Juventus have reportedly agreed on a ‘deal in principle’ to sign Chelsea’s Olivier Giroud.

Juventus are looking for a new striker after agreeing to release Gonzalo Higuain, with Barcelona’s Luis Suarez believed to be their top target.

According to Gianluca DiMarzio, Juventus now sees Giroud as target alternatives to Suarez, with the France international facing a battle to maintain a first-team spot at Chelsea this season.

Giroud have reached an agreement in principle with the Old Lady over a two-year deal at 4.5 million per season.

The 33-year-old faces competition for a starting spot at Chelsea from summer signings Timo Werner and Kai Havertz, as well as striker, Tammy Abraham.

The former Arsenal star could potentially be Frank Lampard’s fourth choice this season.

Chelsea value Giroud for over £5million.

However, Juventus are yet to submit an official bid to the Premier League giants for Giroud.