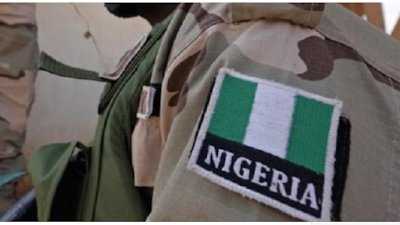 A soldier fighting Boko Haram insurgents in the north-east has reportedly killed himself.

It is not clear what led to this action, but sources said the soldier suddenly took his gun, aimed at his head and pulled the trigger.

“He shot himself in the head, and he died immediately, before other soldiers could even rush to help,” a military source said.

The soldier was also said to have left a note for his wife.

His body has been evacuated and sources said investigation into what led to the incident is in progress.

Sagir Musa, army spokesperson, was not immediately available to comment over the matter.

In July, a soldier in the army’s 202 battalion in Bama, Borno state, killed a lieutenant who did not give him pass to visit his family.

Also in 2017, another soldier committed suicide after killing his superior.

Soldiers, especially those deployed in operation Lafiya Dole in the northeast, have always complained about poor welfare.