Serena pulls out of WTA tournament in Rome 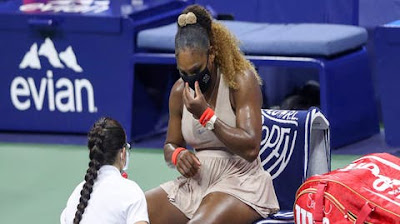 Serena Williams withdrew from the WTA clay-court tournament that begins Monday in Rome due to a left Achilles tendon injury sustained in her US Open semi-final defeat, the tour announced Saturday.
Williams, chasing her record-tying 24th Grand Slam single crown, lost to Victoria Azarenka in three sets on Thursday on the Arthur Ashe Stadium hardcourt.
The former world number one, a four-time Rome champion, joins 2019 US Open winner Bianca Andreescu and two-time Wimbledon winner Petra Kvitova is skipping the tuneup for the French Open, which begins on September 27.
“I regretfully must withdraw from the Internazionali BNL d’Italia due to an Achilles strain,” Williams said in a statement. “I’m so humbled by the continuous support from my fans in Rome and I look forward to making my return soon.”
Williams took a medical timeout in her New York loss to have the Achilles injury treated.
“I just was stretching,” she said after the match. “I ran for a shot, and off that first step that I took, it was a long point. It wasn’t my ankle, it was actually my Achilles. It just overstretched. It was pretty intense. Then that was that.”
Top-ranked Ashleigh Barty withdrew from Rome earlier in the week, the Australian star saying she would shut down her season due to coronavirus concerns and travel restrictions.