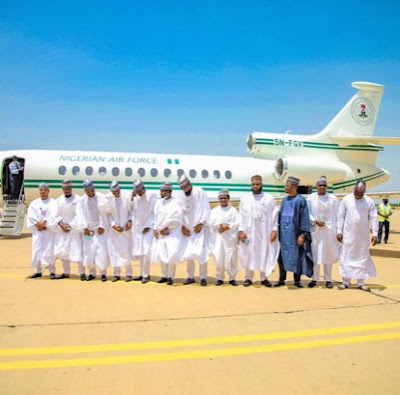 President Muhammadu Buhari has come under fire for allegedly authorizing the use of the Presidential Jet for the wedding of one of his aides, Bashir Ahmad.

Reno Omokri, in s statement to newsmen on Saturday called on the President to refund the National Treasury the cost of using the Presidential Jet for his PA’s wedding.

President Buhari’s assistant on New Media, Bashir Ahmad wedded in Katsina on Friday and the Presidential Jet was said to have been used to ferry him and others in the Presidential Villa to the venue.

The Presidency is said to have denied using the jet to ferry Bashir, saying that it only flew the President’s representatives, but Omokri insists the excuse is flawed and shows that after five years in office, Buhari still does not understand statecraft.

Omokri, a former aide to ex-President Goodluck Jonathan noted that a Presidential jet is not the property of the President but of the nation, for use in the ferrying him (the President) to and fro his official functions.

The former Presidential aide recalled that a similar incident happened in South Africa when on September 12, 2020, it was discovered that President Cyril Ramaphosa had allowed his Minister of Defence, Nosiviwe Mapisa-Nqakula, to travel with South Africa’s Presidential Jet for an official meeting of the African National Congress.

According to him, “Once this came to light, the Julius Malema led Economic Freedom Fighters pressure group, insisted that the President and his party must reimburse the national treasury for the cost of the trip, as well as suspend the Defence Minister.

“In less than 48 hours, the ANC capitulated and reimbursed the national treasury, and the fate of the Defence Minister is hanging in the balance.

“Also, the Office of the Public Protector, Busisiwe Mkhwebane, is investigating the ANC and the government over the incident. That is how it should be.

“It is a significant breach of his fiduciary duties for General Buhari to give out the Presidential jet to his representatives to his Personal Assistant, Bashir Ahmed’s wedding in Katsina on Friday, September 27, 2020. This is a private event that has no bearing on Nigeria.

“And the excuse given by the Presidency that the jet did not ferry Bashir, but only flew the President’s representatives is flawed and shows that after five years in office, General Buhari still does not understand statecraft.

“If this had occurred in the United Kingdom, it could have caused the government to fall. I understand that standards have slipped in Nigeria since 2015, but we must at least pretend to be a civilised nation.

“The Buhari administration keeps complaining that times are hard, but they are living large at our expense and Nigerians should not take this lying low from a government that just increased fuel price and power tariff.

“The wedding of your subordinates is a private affair. It is not an official function.

“I, therefore, call on General Buhari to reimburse the national treasury for the cost of fuelling the Presidential jet to Katsina for Bashir Ahmad’s wedding, as well as the cost of paying the crew.

“I also call on the President to suspend all public officials involved in this abuse of office. Failure to do so is proof positive that the President is not in charge of his government and his anti-corruption war is, in reality, an anti-opposition war.”