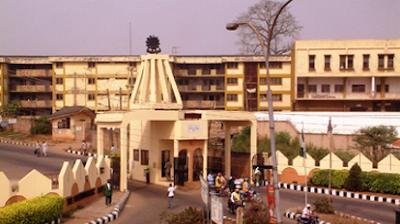 A lecturer at the Polytechnic Ibadan in Oyo State, Mr. Ajadi Ojo Omotosho has been relieved of his appointment as lecturer in the institution.

It was gathered on Saturday that Omotosho’s appointment was terminated over alleged s3xual immorality with a student named withheld.

It was gathered that Omotosho, until his sack was a lecturer in the department of Urban and Regional Planning in the institution.

He was, however, sacked over an alleged s3xual act which the institution said had tarnished the image of the school.

The institution in a statement signed by the Registrar/Secretary to the Council, Mrs. Modupe Fawale noted that Omotosho was shown the way out of the citadel of learning for his involvement in act of misconduct which resulted in “embarrassing and tarnishing the image” of The Polytechnic, Ibadan his employer.

She noted that the Governing Council of the institution approved the immediate termination of Omotosho’s appointment with effect from Friday , 11th September, 2020.

Omotosho is expected to hand over all properties of the institution in his possession to his Head of Department, according to the statement.

Fawale in the letter dated 15th September, 2020 said, “You will recall that you were engaged in an inappropriate behavior and a poorly managed relationship with your former student. These resulted in embarrassing and tarnishing the image of your employer, The Polytechnic, Ibadan.

“You will also recall your responses and appearances before the investigation panel and senior staff disciplinary committee that looked into the above matters.

“After a careful consideration of the issues above, the Governing Council found you guilty as your actions and activities amount to misconduct.

“The Governing Council, therefore approved the immediate termination of your appointment with effect from Friday, 11th September, 2020.

“You are to hand over all properties of the institution in your possession to your Head of Department”.