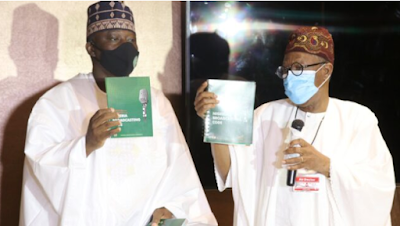 The Peoples Democratic Party (PDP) members in the house of representatives have sued the National Broadcasting Commission (NBC) and Abubakar Malami, attorney-general of the federation (AGF), over the recently amended broadcasting code.

Lai Mohammed, minister of information and culture; was also named as defendant in the suit marked FHC/ABJ/CS/1136/2020, according to PUNCH.

The suit was reportedly filed on Wednesday by one Francis Obalim who deposed a 15-paragraph affidavit and a written address on behalf of the PDP lawmakers.

The code was launched in Lagos on August 4 despite opposition by stakeholders in the industry.

Some of the amendments to the code are the restriction of exclusive contents on platforms and broadcast content having 75 percent input from Nigerians.

In the suit, the opposition lawmakers argued that the amended code is a breach of the constitution because it “unlawfully creates offences of hate speech and fake news and to prescribe penalties for them, whereas the said offences are not prescribed by any written law in force.”

The lawmakers asked the court to determine whether, by the provisions of section 36 (12) of the constitution, the amended 6th broadcasting code enacted/issued by the first defendant (information minister), which created the purported offences of “hate speech and fake news” and correspondingly purported to have imposed penalties, is not unconstitutional, null and void.

They asked the court to determine whether or not, having regard to the extant provisions of sections 6 and 23 of the National Broadcasting Commission act Cap. N11 LFN 2004, the minister has the statutory power to issue broadcasting code and whether the 6th broadcasting code purportedly issued is not a nullity and therefore void.

The development is coming at a time Chidiebere Obidike, a movie producer, asked the Lagos federal high court to restrain the commission from enforcing the amended broadcasting code.