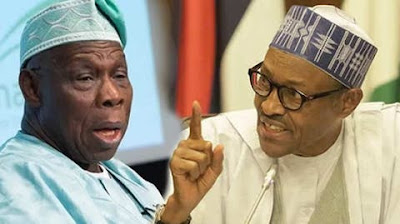 Femi Adesina, Special Adviser on Media and Publicity to President Muhammadu Buhari says only his principal has enough confidence to confront former President Olusegun Obasanjo, tell him his honest opinion on things “and survive it”.

Adesina, in a piece titled, ‘Buhari Applause For Akinwumi Adesina’, compared Obasanjo to “America and some other world powers”, adding that “you have every right to shiver in the broiling sun” when they come after you.

But the President’s spokesperson, in the piece published on his website on Friday, said, “President Buhari stood against the wishes of America on AfDB Presidency” and supported the re-election bid of African Development Bank President, Akinwumi Adesina.

It had earlier reported that the African banking institution and its President were in the eye of the storm earlier this year over allegations of impropriety levelled against Akinwumi Adesina by some whistleblowers working in the bank.

However, the 60-year-old former Nigerian minister of Agriculture, who became the first Nigerian to helm the AfDB in 2015, had insisted he was “innocent” of the charges.

The bank’s Ethics’ Committee, which first investigated the allegations, gave him a clean bill that was accepted by the Board of Governors but the United States outrightly rejected the report and demanded a fresh probe by an independent body.

Akinwumi Adesina was then sworn in on September 01, 2020, for another five-year term after getting a 100 percent vote of all regional and non-regional members of the Bank.

Commenting on the development, Buhari’s spokesperson wrote, “The strife is o’er, the battle done. But it was by no means easy. It took so much: tact, diplomacy, guts, deft footworks, prayers, yes, prayers, and so many other things.

“But today, we can noise it all around. Dr Akinwumi Adesina is now elected for another five-year term as President of the African Development Bank.

“If America and some other world powers come after you, you have every right to shiver in the broiling sun. It’s like Chief Olusegun Obasanjo telling you to dismount from the horse of leadership in Nigeria. Only a Muhammadu Buhari can look him straight in the eyes, and say; No sir. And survive it.”

He, however, noted that Buhari would not have supported the AfDB President if “Adesina had peradventure been tainted with the slightest whiff of corruption or any other unethical act.”