Nobody can say PDP is not fulfilling its promises in Rivers, Wike boasts 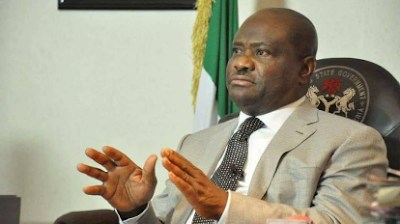 River State Governor, Nyesom Wike, has boasted that nobody can challenge the developmental strides of the Peoples Democratic Party, PDP, government in the state.

The Governor said that anyone who decides to leave the PDP in the state would not do so because of his inability to fulfill campaign promises.

Wike spoke when he appeared on Channels Television’s Sunrise daily on Friday.

“Tell me one reason anyone in Rivers State will say, ‘PDP, you made promises to us and did not fulfill it’ tell me one,’ he said.

“Tell me one reason in Rivers State anybody will say, ‘We’re tired of promises.’ Tell me one. My tenure has not ended. I still have time and I’m fulfilling all the promises I made.

“So it would be difficult for anyone to say ‘I’m leaving PDP based on the fact that the Governor made promises and cannot fulfill them.’

“But you can leave PDP if the person has an ambition and cannot actualize such ambition in PDP and says ‘let me go to so so party and see if they’ll give me ticket,’ not that PDP is not doing well in Rivers State. Nobody can say that.

“Even the opposition knows that they cannot in all sincerity come out to say that the PDP is not doing well in Rivers State, therefore, we must change the government of Rivers State, nobody can say that.”