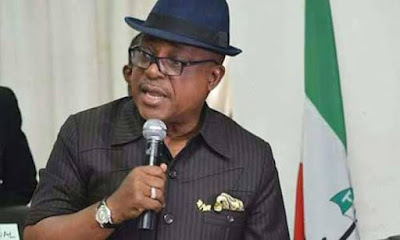 National Chairman of the Peoples Democratic Party (PDP), Uche Secondus, has commended former President, Olusegun Obasanjo and other government critics for speaking the truth about Nigeria.

Obasanjo, on Sunday, declared that the country is dividing, a position that rattled the federal government.

In a statement, Secondus berated the presidency, the All Progressives Congress (APC) and their supporters for playing to the gallery.

Secondus told them to embrace words of wisdom from patriotic elders, instead of attacking what is real and overwhelming to all citizens.

The PDP chairman advised President Muhammadu Buhari and the APC to absorb wise counsels, noting that the nation under their watch is going down.

He warned the presidency to stop abusing and disrespecting nationalists who fought for the unity of Nigeria.

The party leader condemned the multiplicity of taxation, tariffs and security challenges amid biting economic hardship.

Secondus, however, demanded a free, fair and credible election in Edo State on September 19.

He cautioned against militarization of the poll.

“To deploy military and other security agencies to do election duties outside the one statutorily assigned to them as was witnessed in 2019 general election and the gubernatorial elections in Bayelsa and Kogi State clearly undermines democracy.

“We saw and witnessed the gimmick in Osun, Bayelsa, Kano States where security operatives were used to disrupt polls at PDP strong areas leading to cancellation and the so-called inconclusive elections.”