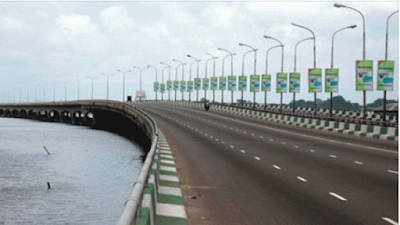 The Federal Controller of Works in Lagos, Olukayode Popoola, says first phase of repairs on Third Mainland Bridge would be delivered in October.

He told the News Agency of Nigeria on Friday that almost all bad expansion joints had pulled out and would be replaced once the weather becomes clement.

The first phase of the project covers the Oworonsoki-bound carriageway.

“We have been able to cut all the six expansion joints and removed the concrete. We have pulled out four, remaining two. We are still looking at October, we will complete the work on the Oworonsoki-bound lane,” he said.

The bridge was partially shut on July 24.

The repair is expected to last for six months with the construction divided into two phases of three months on each carriageway.

Popoola added that the ongoing phase one emergency rehabilitation of the Eko bridge was about 75 per cent completed.

“The plan is to open the bridge to traffic in another two or three weeks, when we will be done with the emergency repairs,” he noted.

On section one of the Lagos-Ibadan Expressway, the controller confirmed it was 54 per cent completed.

On Lagos-Abeokuta-Ota Expressway, Popoola said asphalt was being laid on some sections, including Kola Bus Stop area of Lagos State.

He added that 160 metres of drains had also been completely reconstructed on the Lagos side of the project.

The controller decried the drain stuffing habit of Lagos residents.

Popoola said this was frustrating highway drainage cleaning exercises and urged everyone to keep the environment clean.