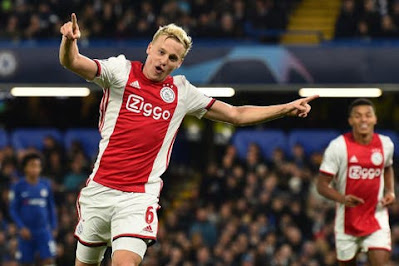 United on Wednesday announced they had completed a deal for the Netherlands international worth a reported initial 39 million euros ($46 million).

Nouri, now 23, suffered brain damage while playing for Ajax in a pre-season game in Austria in 2017.

Van De Beek, also 23, explained why he had chosen shirt number 34 in an interview on United’s official website.

“This is a special thing for me because my good friend Abdelhak Nouri… maybe you know the story, he had a heart attack and he’s a good friend of mine.

“I’m really close with his family and his brother is one of my best friends and I talk a lot with them.

“So I decided to take his old number on my shirt and I want to get good memories with this number.”

Van de Beek, who has signed a five-year deal at Old Trafford, is Ole Gunnar Solskjaer’s first signing of the summer transfer window.