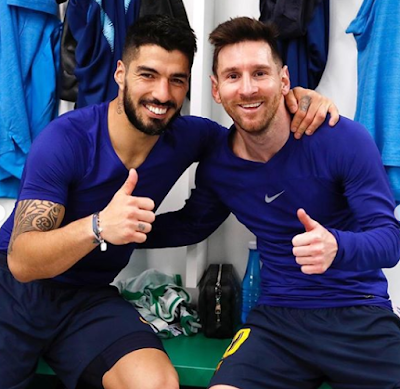 Lionel Messi says nothing at Barcelona surprises him anymore with the captain adamant Luis Suarez has been "kicked out" of the club.

On Wednesday it was announced that Atletico Madrid had reached an agreement with their La Liga rivals to sign the 33-year-old.

Ex-Liverpool striker Suarez scored 198 goals in 283 appearances for Barca following a £74million move in 2014, but does not figure in the plans of new head coach Ronald Koeman, who replaced Quique Setien in August.

“I was already getting the idea but today I entered the locker room and the penny dropped. It’s going to be so difficult not sharing every day with you, both on the pitch and off it. You will be missed. There were many years, friends, lunches, dinners. Every day together will never be forgotten, Messi said on instagram

“It will be strange to see you wearing another shirt and even stranger to play against you. You deserved to be celebrated as what you are: one of the most important players in the club’s history, achieving important things both as a group and individually. And not to be kicked out like they’ve done. But the truth is that nothing surprises me anymore.

“I wish you all the best in this new challenge. I love you very much. See you soon, friend.”

Messi had informed Barcelona earlier this summer he wished to activate a clause in his contract to leave on a free transfer, but has decided to remain at the Nou Camp for the season and will captain the side for a third consecutive season.