Leyton vs Tottenham: Carabao Cup tie called off, Mourinho’s men to be given bye into 4th round 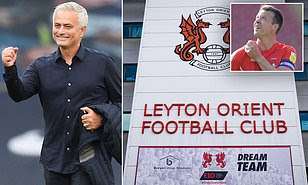 The Carabao Cup third round tie between Leyton Orient and Tottenham Hotspur has been called off.

This is due to as many as 10 Orient players testing positive for COVID-19.

The game was scheduled for 6pm on Tuesday, but the decision was confirmed by 4pm.

According to EFL rules, their inability to host the fixture, hands Spurs a bye into the fourth round of the competition.

However, the EFL are yet to confirm that Jose Mourinho’s men will automatically go into the next round.

In a statement, they said: “Tonight’s Carabao Cup match between Leyton Orient and Tottenham Hotspur is not taking place this evening as scheduled.

“Discussions are ongoing between the relevant stakeholders in regards to the implications of the decision not to play tonight’s game and a further update will be provided in due course.”